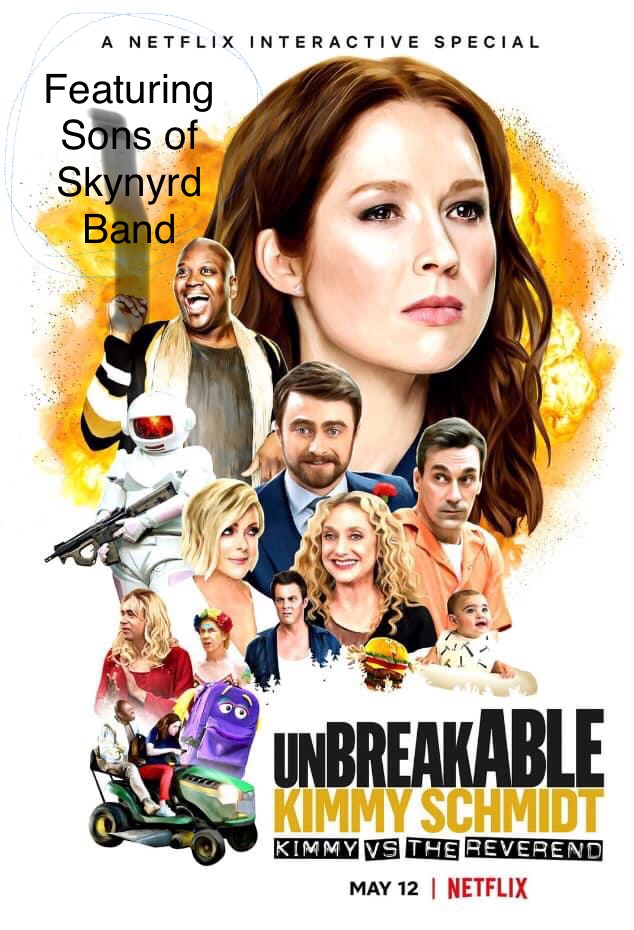 Sons of Skynyrd recently had the pleasure of being featured in the Netflix Original “The Unbreakable Kimmy Schmidt – Kimmy vs. The Reverend”. Head on over to Netflix and check it out!

“As the music supervisor and executive producer for Netflix’s The Unbreakable Kimmy Schmidt, I was lucky to be able to produce many musical segments for the show and the subsequent special. That pleasure now includes the fantastic Sons of Skynyrd.  When I needed the perfect band to play a killer version of “Freebird,” I knew who to call. They were awesome, professional, and totally killed it! Next time I need a rockin’ version of a Skynyrd tune I will not hesitate to reach out to them again.”

Something The Love and Understand

Bryan Williams was raised a simple kind of man growing up in Canadensis, Monroe County.

The Covington Twp. resident was a self-described hunter, fisherman and all-around “hell-raiser” who would rather be outdoors than in.

Southern rock was more than just a favorite type of music to “turn it up”.  It was a way of life for the lead vocalist of Sons of Skynyrd, a popular tri-state area cover band.

“It reflects a lot of my own life,” Mr. Williams said.  “It’s real music you can relate to.  I always wanted to play southern rock growing up,” he added, laughing, ” I tell people I’m from southern Canadensis.”

Sons of Skynyrd consists of several players who have jammed together for more than a decade in various permutations of bands.  One of the earliest incarnations of the tribute act was a croup called Crawdaddy, which featured Mr. Williams plus guitarists George Festo and Bobby DelSapio.

“It was hot and a lot of work, but that’s where we got our start,” Mr. Williams said.

Keyboard player Rich Tancredi joined the outfit after departing another act called Saturday Night Special, and gained respect for gold records on his walls earned during years as a musician for the likes of singers such as Mariah Carey and Taylor Dayne.

“Weird lucky to have him,” Mr. Williams said of the keyboardist.

Several of the guys also played in the Artimus Pyle Band as they geared up for the Lynyrd Skynyrd tribute.

By 2007, drummer Joe Callari asked for a commitment from the strongest core musicians for Sons of Skynyrd, which he envisioned at the forefront of gigs throughout the Connecticut-New York-New Jersey-Pennsylvania club circuit.

With members spread out among those states, the commitment is more to the music than to a regular rehearsal schedule.  Each musician is responsible for learning their parts and showing up at sound check ready to rock.

“We communicate through email and get together to rehearse every six weeks or so in (New) Jersey,” Mr. Callari said.  “Everybody in this band knows their stuff and it comes together in a show even though we’re in three different states.

“We make it work.” Mr. Callari said.  “We’re true to the music.  We don’t overplay it or underplay.  We present it in proper fashion.  We’re not mimicking, we just enjoy doing it.”

The majority of songs in the regular setlist consist of Skynyrd classics and other southern rock staples, including hits from Charlie Daniels Band, Marshall Tucker Band, 38 Special and the Allman Brothers Band.  Occasional female vocalists and substitute players sit in with Sons of Skynyrd based on who is available per show, which means Janis Joplin or Carrie Underwood tunes can find their way into the mix.

No matter which artists make an appearance, the feeling and passion behind the music is always the same.

“It’s not going through the motions.  We get the sound, it makes our blood boil,” Mr. Callari explained.  “We’re just trying to keep it alive because it is a dying breed.”

“It’s very pure,” he said.  “It’s not overdubbed to death.  It’s straight from the heart.  Very point blank, so to speak.”

Mr. Williams said that even though the songs are aging and may not be as familiar to younger audiences, Sons of Skynyrd rarely fails to connect with listeners.

“The response is great if you can get the right crowd to come out,” he said.  “What I notice, (we get them) when they see a three-guitar attack.  It’s really heavy and thumps-you-in-the-chest kind of music.”

Sons of Skynyrd finds enthusiastic audiences of all sizes, in the smallest corner bars or at the larger festivals and truck shows they play across the states.

The group also is committed to giving back.  They’ve volunteered their talent to New York Fire Dept. fundraisers and will play an upcoming benefit gig at Renegades Saloon in Newfoundland on Saturday, Jan. 16, for local cancer patient Elaine Pinto.

It’s all in an honest day’s work for the honky tonk lovers.

“We don’t stick to one thing at a time,” Mr. Callari said.  “We’re doing something right.”

Not just another sound-alike band trying to play southern rock, Sons of Skynyrd’s members have played alongside original members of Lynyrd Skynyrd and other top Southern acts.

Long Island’s top Lynyrd Skynyrd tribute band is an all-star ensemble featuring veterans of classic touring bands.  Members of Sons of Skynyrd were members of the Classic Southern Rockers Band (which also featured founding and contributing members of Lynyrd Skynyrd, Molly Hatchet, Blackfoot and The Outlaws), and of the multi-award winning band Quickdraw, which has toured with Southern Rock royalty including Charlie Daniels Band, the Marshall Tucker Band, Delbert McClinton, and Asleep at the Wheel, to name a few.  Members have also worked with Taylor Dayne, Mariah Carey, Celine Dion and Eddie Money.

“Sons of Skynyrd is the most authentic Lynyrd Skynyrd tribute experience in the business today,” said Sandy Hinden, co-director of the Dix Hills Performing Arts Center.  “They create the excitement, energy and, above all, the music for which die-hard Skynyrd aficionados and other southern rock fans have been waiting.”

Together they recreate not just the notes, but the deeper musical feeling of an authentic Lynyrd Skynyrd concert.  And while different configurations of the original Lynyrd Skynyrd do occasionally tour, the original line0up including late front man Ronnie Van Zant, guitarist Steve Gaines and vocalist Cassie Gaines, who died in the tragic plane crash, and the keyboard player Billy Powell, who recently passed away, are now lost to Rock-n-Roll history.

But Sons of Skynyrd plays an impressive set of the original Lynyrd Skynyrd tunes from the band’s evolution and growth from 1973’s “Pronounced Let-nerd Skin-erd” to the height of its popularity with the 1977 release of “One More from the Road”, to the sad release of “Street Survivors”, following the crash and beyond to the band’s reformative years with Rossington-Collins Band.